Kinks in the Food Chain 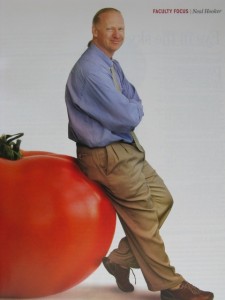 PAMELA WILLITS talked with him about recent recalls and the need for change.

Last summer we had the tomato and chili pepper recall. The recent peanut recall covered 44 states and involved 600 reported cases of salmonella related illnesses, including nine deaths. Why are we seeing more recalls and what can be done to better protect our food?

We’re seeing larger recalls of greater scope due to enhanced technology and better regulations. Still, I think the trend is going in the wrong direction.  Recall should be the last resort.

Part of the problem is we have a complex food supply chain, at times involving foreign food sources: for example, the China pet food recall. In a short supply chain, a result of efficient transportation, product can reach the stores before a problem is detected. Even locally grown or organic doesn’t always mean it’s safe. We need technology that detects problems before they enter our food chain.

How successful are recalls? Are consumers heeding the messages?

Recalls are triggered by an illness outbreak, so it becomes a case of which came first, the chicken or the egg. With fresh produce, the vast majority of recalls occur after the shelf life has already expired.

After the initial recall, consumers tend to develop recall fatigue, tuning out continuing news and leaving them at risk during an expanding recall. We saw this with the peanut recall, which evolved from 30 to 60 to 100 to finally 2500 contaminated products.

How do recalls affect companies in terms of revenue and litigation issues?

Well, Peanut Corp. of America is bankrupt.  In the past, poultry recalls have lead to plant closings. In 2003, a class act lawsuit was filed against a leading grocer following a meat recall for not notifying customers sooner. As a result, information obtained through customer loyalty cards is now used in recalls to notify consumers of possible tainted items recently purchased.

So, on the other side is greater goodwill, as we saw during the peanut recall when Kroger expanded its recall to include store-baked products. In effect they’re saying, “Don’t shoot the messenger; we’re acting on your best interest in announcing this recall.”

What kind of impact do recalls have on customer and brand loyalty?

Typically, customers return to their buying patterns within four weeks.  You can rebuild brand loyalty if the right things are done during and after a recall, like Tylenol did [after tainted capsules killed seven people in 1982] by acknowledging the problem, reinforcing their marketing message and introducing tamper proof packaging.

With the recent appointment of Tom Vilsack as Secretary of Agriculture,there’s been talk in Washington of replacing the Food and Drug Administration and the Department of Agriculture with a single food safety agency. What are the inherent problems with the current system and how would that change come about?

The majority of the Food and Drug Administration’s budget oversees drugs and medical devices, with the remainder focused on food safety. The USDA, which oversees meat and poultry, was designed to also promote agriculture.  It raises the question of how can they regulate food safety as well as promote meat sales. With the exception of infant formula, neither the FDA nor the USDA can require a recall.  It’s still voluntary on the part of producers and retailers.

I’d liken the creation of a single food safety agency to the creation of the Environmental Protection Agency, which was developed when water, air and soil regulations became too wide spread across multiple agencies to successfully enforce.

How does our present system compare to other countries?

We do some things better, but there’s room for improvement.  Other countries are looking more aggressively at salmonella risks – the United Kingdom has focused on eggs, Denmark on pork and New Zealand on lamb.  These countries plus Australia, Ireland and Canada adopted a single food safety system about 10 years ago.  The rest of the European Union adopted a similar system six years ago.

As it took a major crisis in other countries to prompt change to a single system, the peanut recall may be our tipping point.